Birth Control Before The Pill: How Women Prevented Pregnancy Throughout History 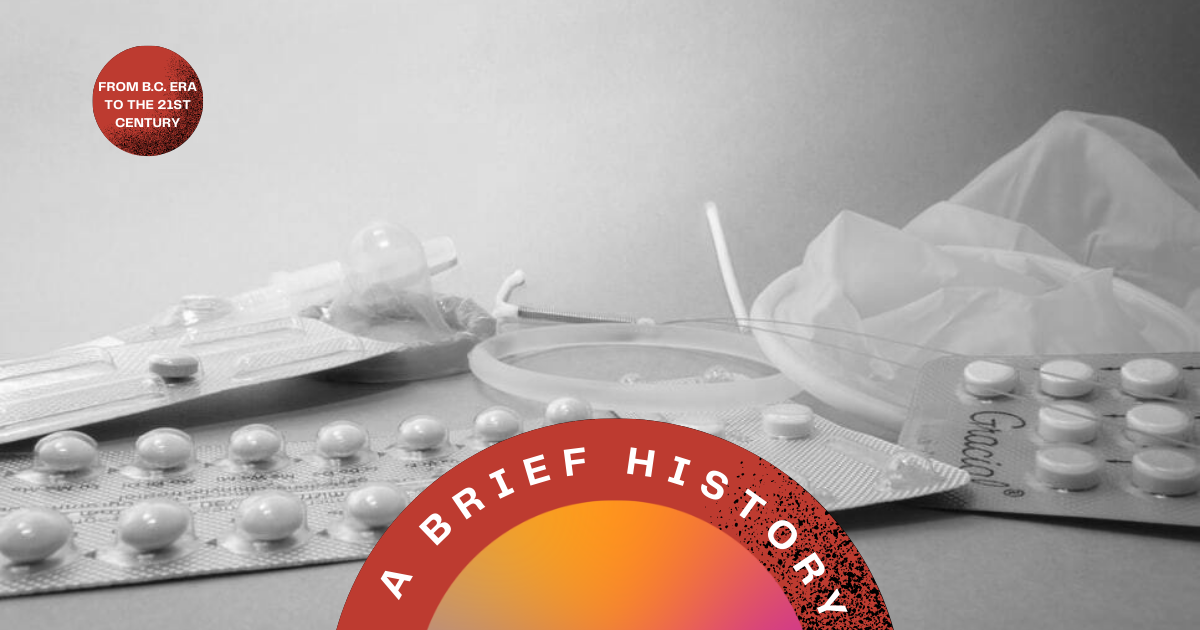 Discover a brief history of contraception before the invention of the birth control pill. You’ll be surprised to know about various bizarre and ancient methods!

Birth control options are now more than ever readily accessible in both physical and online spaces. But have you ever wondered how it was like for women in the past when technology wasn’t a thing yet? Read on and I imagine you will count yourselves lucky to be living in the 21st century. Now, you can even get your birth control online and delivered right to your doorstep.

Ancient birth control methods, no thanks!

Commonly used traditional methods comprise largely home-made techniques, some of which may (or may not) surprise you. In the ancient era, women relied on disturbing ingredients like crocodile dung, and bizarre concoctions of edibles such as honey and acacia. Condoms were made from animal membranes and there was a common practice of washing and soaking one’s genitals with ingredients like lemon and olive oil. Lastly, a deadly-sounding method even includes ingesting lead and mercury. Otherwise, before the discovery of chemical and hormonal contraception, the traditional withdrawal (pull-out) method was just as common back then.

What about the trusty “wetsuit”? The first known documentation of the use of condoms was by King Minos of Crete in about 3000 B.C. Apparently, his semen contained “serpents and scorpions” which killed his mistresses after intercourse. Back then, condoms were subjected to primitive ideals and definitely did not come in the clean, rubber form we are now accustomed to. Thus, as a form of protection, a goat’s bladder was inserted in the vagina of King Minos’ wife to act as a sheath. Essentially, animal bladders were primarily employed to prevent the contraction of venereal diseases rather than to prevent pregnancy. Resourceful or downright nasty? You decide.

Finally (and thankfully), rubber was introduced in the manufacturing of condoms which brought about real technological advances. By the 1860s, there was a rise in the large-scale production and popular use of latex condoms, altogether replacing skin condoms made from animal intestines or bladder.

The battle for birth control

Despite being normally associated with family planning, birth control faced resistance in the 1800s. Many perceived contraception as immoral and akin to encouraging prostitution. (Source: Stanford Medicine)

In fact, under the Comstock Act of 1873 in the United States, even medically prescribed writings or materials regarding contraception and abortion were made illegal as they were seen as obscene and indecent. As a result, the enforcement of the sale and distribution of materials concerning birth control eventually prompted social reformers to advocate the repealing of the federal law. Before the birth control movement became closely tied to the feminist movement, worry-free and safe sex were pretty out of reach for women in those days.

From the 1940s to 1950s, activists Margaret Sanger and Katharine McCormick embarked on a vigorous scientific research in search for the pill that could potentially control fertility. Oh boy did this cause a shift in the previously uneven level playing field for women to take charge of their sexual health. The first invented pill was both effective and simple to use, thus attracting millions of women to partake the first of oral contraceptives. (Source: Planned Parenthood Federation of America)

Implants such as the intrauterine device (IUD) also made their mark in history since 1909. IUDs were first experimented using a ring made of silkworm gut with two protruding ends of the cervical os. Subsequently, other physicians such as Ernest Graefenberg (FYI: the G-spot was named after him), developed similar versions that proved more effective with the use of a mixture of metals including copper. Ultimately, it was only in the 1980s did the FDA-approved Copper-T gain more significant traction as one of the most effective and safest forms of contraception.

Needless to say, birth control has improved drastically and we should all be grateful for today’s plethora of reliable birth control methods to choose from. Beyond mere access to birth control pills, other forms of birth control such as patches and emergency contraception have likewise allowed women all around the world to be empowered, educated and take charge of their own health.

Marhol, A. (2021). Ancient Birth Control Methods: How Did Women Prevent Pregnancy Throughout the Ages? Flo. flo.health/menstrual-cycle/sex/birth-control/ancient-birth-control-methods